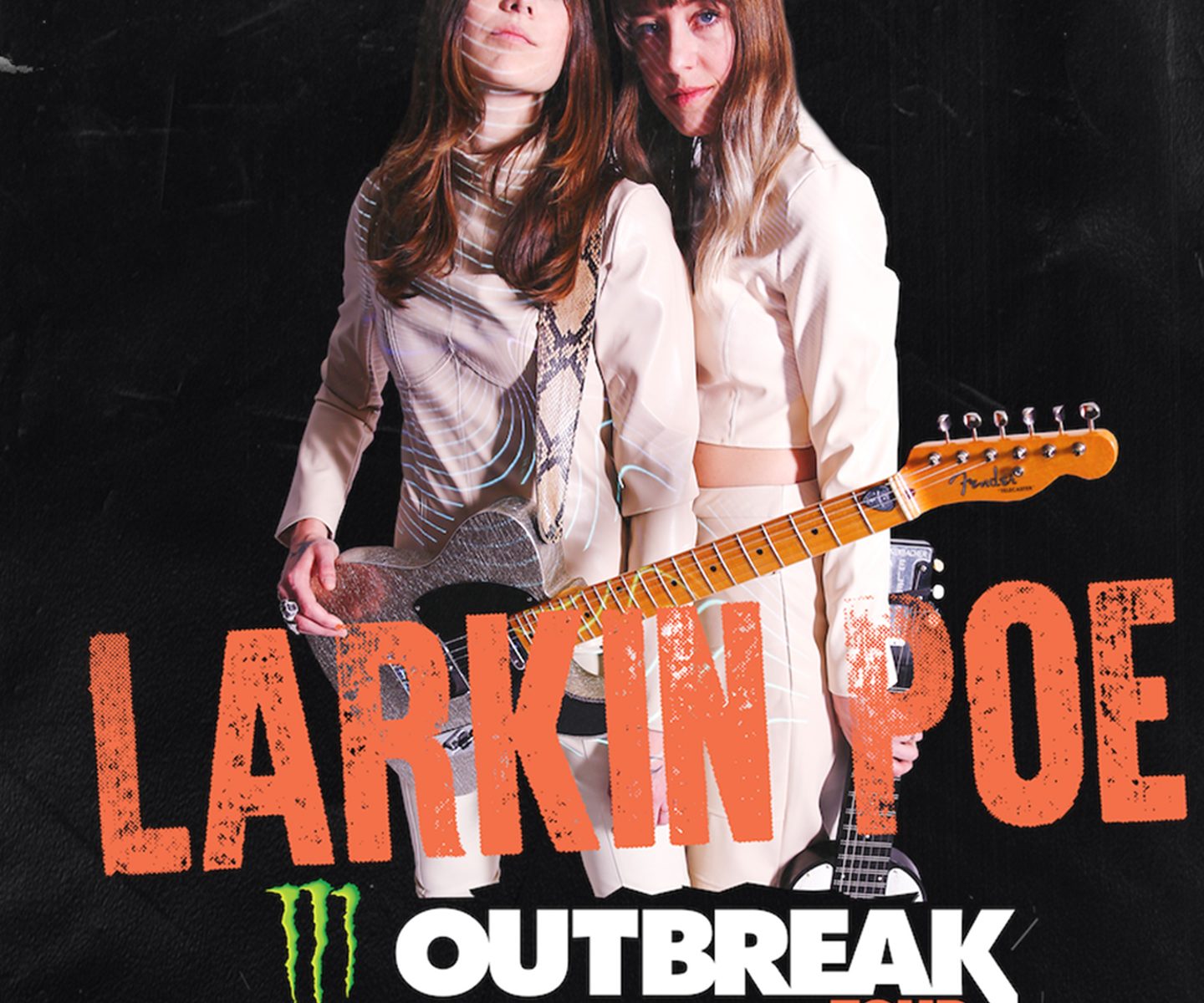 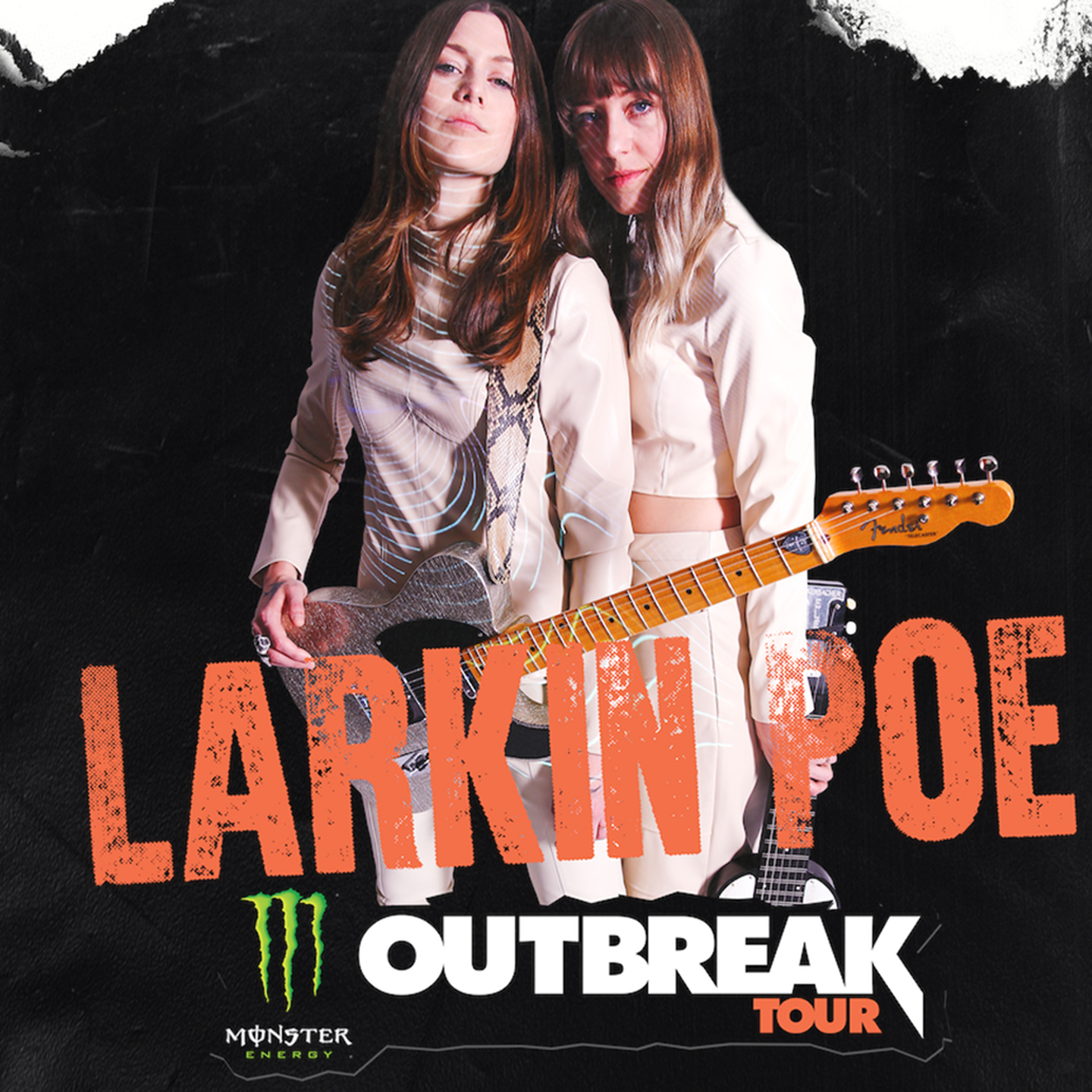 Please Note: This event will be presented in accordance with applicable public health requirements and considerations as of the date of the event; which could include changes to capacity, attendance prerequisites, procedures, and other protective measures per government and venue policies. This may include proof of vaccination or a negative COVID-19 Test.

“The songwriting and recording development of Larkin Poe and their connection to the live audience has been a joy to behold…If you can find something of your own in a Skip James song, or spend a Berlin afternoon banging your hotel room’s furniture to render a YouTube version of an M.J. song, you know you’ve come to the right address.”

In any normal year, Larkin Poe would have released an acclaimed new album and then hit the road for a very long time. But of course, 2020 has been no ordinary year. The GRAMMY® Award-nominated sister duo of Rebecca and Megan Lovell kicked things off in June with their fifth studio album, SELF MADE MAN, topping an array of Billboard charts while earning unanimous acclaim around the world. Instead of a summer of tour buses and packed theaters, the Atlanta-bred, Nashville-based Lovells found themselves at home, performing many livestream concerts and adding to their much-loved YouTube covers series. That got them thinking, and now we have Larkin Poe’s second album of 2020 – KINDRED SPIRITS, a collection of stripped-back versions of covers, both classic and new.

KINDRED SPIRITS – which, like its three predecessors, was self-produced by Larkin Poe for their own Tricki-Woo Records, this time from their home studio with engineer and Rebecca’s husband Tyler Bryant of Tyler Bryant & The Shakedown – sees the duo paying tribute to favorite artists from the Allman Brothers Band, Lenny Kravitz, and Robert Johnson to Elton John, Post Malone, Ozzy Osbourne, and The Moody Blues.

“Music is a bridge that can connect generations across time,” says Rebecca and Megan. “In recording KINDRED SPIRITS, our admiration for the artists who originally wrote and performed these songs blossomed into an even deeper reverence. Coming up in a family of music lovers, a lot of the songs have been with us since childhood; in 2015, we started a YouTube series dedicated to paying tribute to our musical heroes that unexpectedly took off and when fans began requesting recorded versions of the songs, we began daydreaming about how an interpretive album might take shape. Bringing these old friends into the studio, stripping them to the bones and recording them live and raw, felt like a ritual.”

When Larkin Poe released SELF MADE MAN, it was in the wake of a remarkable two-year run that saw them earn a #1 Billboard Blues Chart album and a “Best Contemporary Blues Album” GRAMMY® Award nomination for 2018’s VENOM & FAITH. While VENOM & FAITH truly solidified the power and independent spirit of the band, SELF MADE MAN is undeniably the Lovell’s most wide reaching, artistically adventurous, and self-determined work to date, finding the multi-instrumentalist sister duo, pushing their music and message towards hitherto unexplored terrain.

Inspired by their epic world travels yet still powerfully rooted in the creative heritage of their beloved American South, the album was ambitious in both its eclectic, energetic sound and its resolutely welcoming mission, its universal lyrical approach fueled by tradition, invention, and Larkin Poe’s remarkable ability to touch the hearts and souls of their fellow humans worldwide.

In its first week of sales, SELF MADE MAN rose to the top of Billboard’s “Top New Artists Albums” and “Current Rock Albums” charts, while also climbing to #1 “Blues Albums” and #2 on the “Americana/Folk Albums.”

American Songwriter called the band “self made badasses,” going on to say, “Steeped in the sounds and tropes of the South, SELF MADE MAN is heavy and lean at the same time. Good and evil, sanctified and profane, they plug into the themes of Southern Gothic that have fed Flannery O’Connor, William Faulkner, Tennessee Williams, Harper Lee and Carson McCullers.”

No Depression said that Larkin Poe are “kicking butt with a mixture of rocking blues to make powerful, defiant statements,” while the Boston Herald hailed, “Larkin Poe plays southern rock. No matter how expansive your definition of the genre is, the band covers it then transcends it.” The Atlanta Journal Constitution said, “Larkin Poe simply dominates,” while Garden & Gun raved “southern music traditions loom large in the story of Larkin Poe.”

So while 2020 was supposed to be a year of hitting the road and taking their new songs to their fans around the globe, instead its become a year of reflection, of looking inward, of looking back. But Larkin Poe being Larkin Poe, looking in and looking back for them is also looking forward as they continue to put their own signature on the traditions they embrace. Not ones to sit around and wait for something to happen, Rebecca and Megan are constantly churning and creating. No one knows what this next year holds, but rest assured Larkin Poe will find ways to keep it fun and interesting for everyone, as we are all kindred spirits.

“We’re grateful for the experience of making this album and grateful to the kindred spirits who have come before us and written the soundtrack of our lives.”