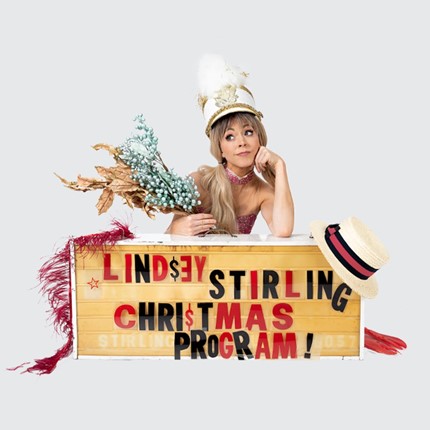 Los Angeles, CA – October 4, 2021 – Platinum-selling electronic artist, violinist, and multi-talented entertainer Lindsey Stirling, known all over the world for her unique, futuristic violin-driven electronic music and exquisite live show, has announced the return of her annual Christmas tour for 2021. The Lindsey Stirling Christmas Program, her fourth holiday outing, will showcase Stirling’s favorite seasonal tunes as featured on her chart-topping and critically acclaimed holiday album, Warmer In The Winter, set against dazzling festive costumes, a troupe of talented dancers, lots of holiday cheer, and much more. PRESS HERE to watch Stirling’s official tour announcement.

“It feels great to be back in the holiday spirit,” exclaims Stirling. “Nothing makes me more excited than sharing this time of year with my fans on tour. Christmas is my favorite holiday and to have the ability to perform some of my favorite Christmas classics live on stage again warms my heart.”

Lindsey Stirling released her first-ever holiday album Warmer In The Winter in 2017, marking the #1 new Christmas album of the year. Due to high demand from fans, a Deluxe Edition was issued in 2018, also topping the holiday charts. Warmer In The Winter, which has sold nearly 400,000 copies and been streamed over 195 million times, features classic and original songs, such as “Angels We Have Heard On High,” “All I Want For Christmas,” “Let It Snow,” “Christmas C’mon,” “What Child Is This,” and “Carol of the Bells,” which hit #1 on holiday radio last year, along with special guests Becky G, Sabrina Carpenter, Trombone Shorty and Alex Gaskarth (from All Time Low). PRESS HERE to listen to Warmer In The Winter. Since she was unable to hit the road in 2020, Stirling brought the holiday cheer home to fans and families worldwide via her live-streaming special “Lindsey Stirling: Home for the Holidays.” The all-new, hour-long ticketed special, which she independently created, produced, and financed, blurred the lines between concert and Christmas special, drawing over 100,000 views. In addition to stylized performances to songs off Warmer In The Winter, the one-of-a-kind experience also featured Stirling’s breathtaking performance of her hit “Crystallize,” where she hung by her hair for a captivating Cirque du Soleil-inspired aerial display – PRESS HERE to watch.

The Lindsey Stirling Christmas Program follows Stirling’s massive summer headlining Artemis U.S. Tour, which received rave reviews and recently concluded with a special virtual tour date via Moment House. The outing featured tracks off her latest chart-topping album Artemis, including “Underground,” “Sleepwalking,” “Masquerade,” “Between Twilight” and “Love Goes On and On” featuring Amy Lee, who joined Stirling onstage at her Nashville show, as well as this year’s standalone single “Lose You Now” and other hits from her extensive catalogue. Artemis, Stirling’s fifth studio album released September 2019 via BMG, debuted at #1 on Billboard’s Dance/Electronic Albums Chart and remained on the chart for 15 combined weeks. The 13-track album has racked up nearly 220 million total global streams and has also been turned into a successful six-part comic book series. PRESS HERE to listen to Artemis and PRESS HERE for info on the comic books. Stemming from the instrumental-only track “Guardian” off of Artemis, Stirling’s recent emotive pop hit about loss and grief “Lose You Now” (BMG) with artist, producer, and songwriter Mako has amassed over 10 million global streams, including more than 4 million views on the song’s beautifully moving music video – PRESS HERE to watch. The duo also issued an acoustic version of the song, stripping it down to just piano and a full string accompaniment – PRESS HERE to listen to “Lose You Now (Acoustic).”

Since the release of her 2012 self-titled debut, the Arizona-raised, Los Angeles-based artist has racked up tens of millions of followers worldwide and more than 3 billion total views on YouTube. Stirling’s sophomore album Shatter Me was certified Gold by the RIAA, after debuting at #2 on the Billboard Top 200 and #1 on the Dance/Electronic Albums Chart and holding the #1 spot on the Classical Albums Chart for 21 consecutive weeks. Her third studio album Brave Enough, featuring guest appearances from Dan + Shay, Christina Perri, Rivers Cuomo, Andrew McMahon and others, earned Stirling her second Billboard Music Award for “Top Dance/Electronic Album.” Additionally, Stirling co-wrote The New York Times bestselling book The Only Pirate at the Party with her sister Brook S. Passey, was the runner-up on Season 25 of “Dancing With the Stars” and has appeared on “America’s Got Talent.” The multi-hyphenate star is also currently helping families in need through her nonprofit charity outreach program The Upside Fund