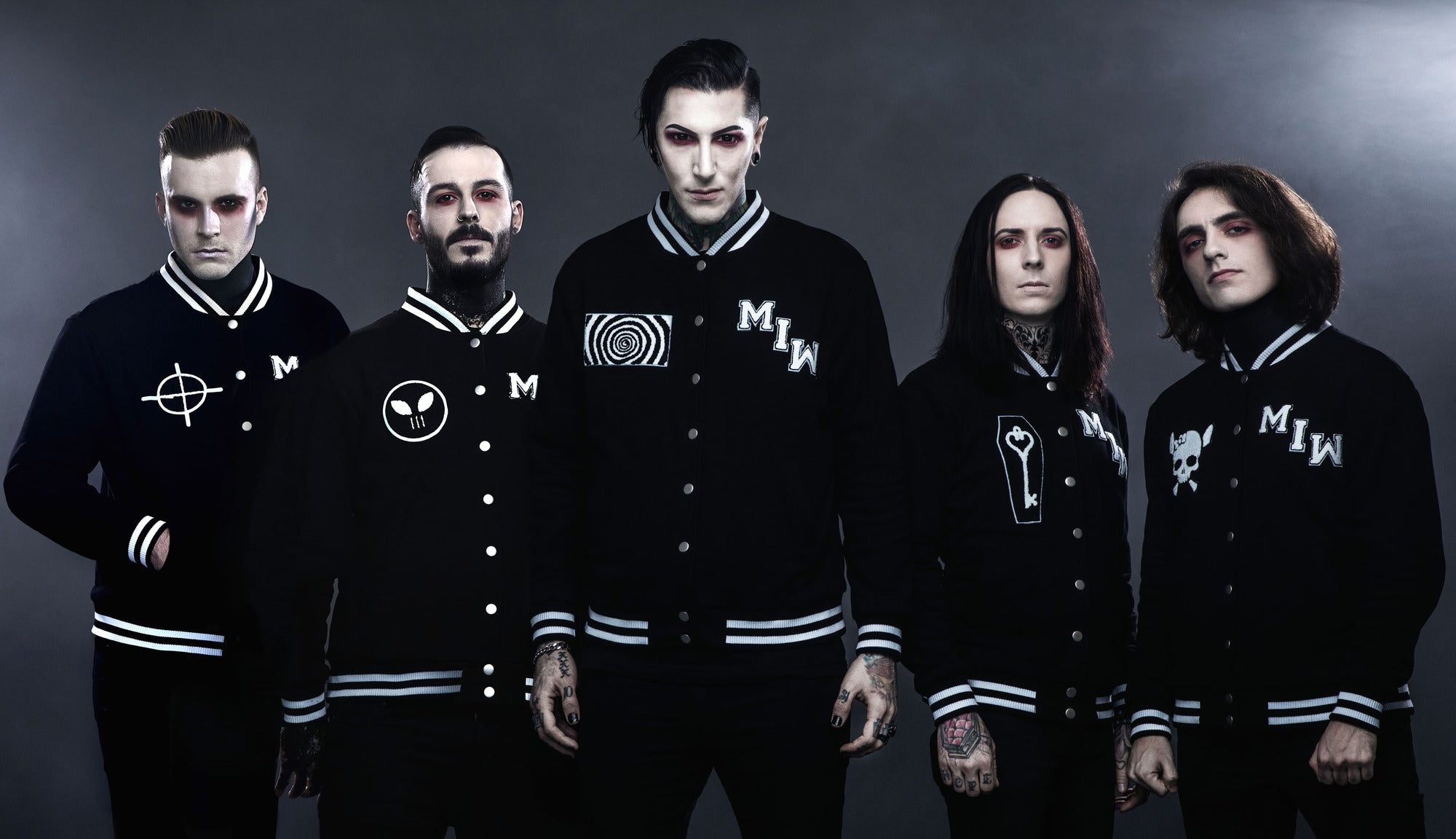 MOTIONLESS IN WHITE / BEARTOOTH – THE DISEASE AND DISGUISED TOUR 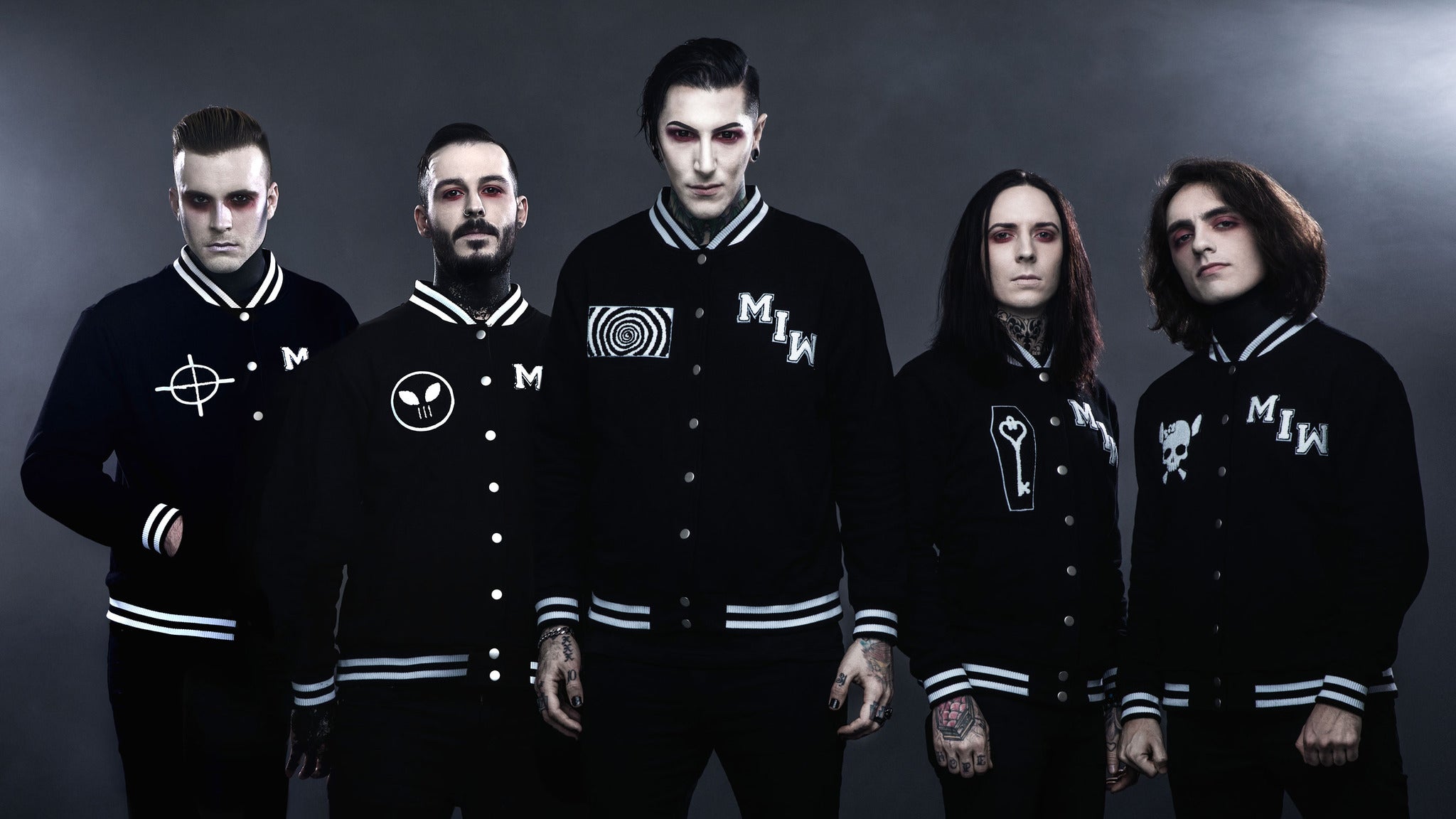 We show the world what we want the world to see. Expressions enshroud our emotions. Countenances conceal our concessions. As a result, truth only slips out in slivers and shards. Motionless In White withdraw any and all veils on their fifth full-length album, Disguise [Roadrunner Records]. The Scranton, PA quintet—Chris Motionless [Vocals], Ricky Horror [Guitar], Ryan Sitkowski [guitar], Vinny Mauro [drums], and Justin Morrow [bass]—hold nothing back.

Unencumbered and unfettered, the musicians uncover their heaviest and most hypnotic body of work to date.

“We really aimed to write a serious record and wear our hearts on our sleeves,” exclaims Chris. “I don’t talk about things online or in public. Instead, I use our lyrics as a way to express what’s going on in my life and my feelings. Things have been great for us on the exterior, but there’s so much we had to work through together and personally behind-the-scenes. Everything comes out on Disguise. I tried to give fans a look behind the mask and let them know what I’m dealing with on the inside as well as what they know of me on the outside.”

Listeners initially fell under the band’s spell in 2006. A pair of albums—Creatures [2010] and Infamous [2012]—sent shockwaves throughout the culture with a combination of big screen-worthy imagery and incisive songcraft. 2014’s Reincarnate crashed the Top 10 of the Billboard Top 200 at #9 and clutched #1 on the Top Rock Albums Chart. The title track emerged as a signature staple, going Top 20 on Active Rock and racking up over 20 million Spotify streams.

2017 saw Graveyard Shift accelerate their ascension. Not only did it claim real estate in the Top 30 of the Top 200, but it also produced a string of undeniable anthems. Tallying over 60 million cumulative Spotify streams, “Eternally Yours” crossed the 15-million-mark as “570,” “Loud (Fuck It),” “Voices,” and “Necessary Evil” [feat. Jonathan Davis] all broke 8 million. Alternative Press named the video for the latter “one of the best music videos of 2017.” Additionally, Alternative Press bestowed an A-score on the record and described it as the “best representation of Motionless In White.” Further critical acclaim came from Kerrang!, Rock Sound, MetalInjection, and many more. As a live force, the band packed venues for headline tours and supported the likes of Slipknot, Korn, Breaking Benjamin, and Marilyn Manson, to name a few.

In 2018, Motionless In White commenced writing for what would become Disguise. During November, they entered a Los Angeles studio with producer Drew Fulk [Lil Peep, Bullet For My Valentine]. By the start of recording, they had amassed a wealth of ideas to build from. It marked the first time they reteamed with a producer on two successive records and the first time they had accumulated so much material.

Even as they “gravitated towards heavier and darker songs,” Chris points to a newfound level of confidence bolstered by the enthusiasm of crowds everywhere.

“Fans really responded to Graveyard Shift’s ‘Voices’,” the frontman goes on. “I try to listen to what they like and what they don’t like. I recognized a common thread where they really love lyrics that represent personal struggles and triumphs. They clung to this one in particular, so it made me more comfortable with opening up about myself.”

The first single and title track “Disguise” allows him to do so. An eerie music box sets an ominous tone before gothic electronics entwine with thick distortion. The singer’s voice slips from haunting intonation on the bridge into a cacophonous scream before a sweeping refrain punctuated by promises such as “You will not put out the fire that burns within.”

“‘Disguise’ really speaks to the common theme,” he admits. “It’s about my life, struggles, view on the world, what music does for me, and the connection we share between ourselves and fans. I’m letting everyone in. I’m dealing with a lot in my head. I often felt like I had to bottle up my emotions. It was like I was wearing a mask or a disguise. I don’t want to put the mask on to please others anymore.”

Meanwhile, “Brand New Numb” pairs raucous riffing and a danceable backbeat with a clarion call chant. An undead rocker, it climaxes on a dedication, “This one’s for the underdogs!”

“It’s one of the more fun tunes,” he goes on. “It’s dedicated to our fans and upholds a message of individuality and being oneself. The song represents that side of us and not worrying about what anyone thinks. It’s a little less aggressive and way more of an upbeat and good energy.”

Elsewhere, a screech of synths snaps into a guttural groove on “Code,” which “shows how music is the universal language and even strangers can mutually bond over it.” The trudging drums of “Legacy” underscore an uplifting and undeniable message for Chris.

“You’re climbing the mountain and jumping hurdles on your personal journey,” he elaborates. “We’re a lot better off as a band, but we’re still on this road. It speaks to the energy of moving forward, climbing higher, and not letting life’s obstacles get you down. You’re beating everything in your way. It’s a really relevant story to Motionless In White.”

In the end, this story gets more powerful as it becomes more personal.

“It’s the same message,” he leaves off. “I hope fans know there is a band out there who is fighting every day to represent the underdogs.  We love being a part of their lives. To have audiences take something from what we do and it be genuine is all we ever asked for. I want to do what music did for me. I’m proud to say it feels like we have. Now, I just don’t want to ever stop.”

Beartooth began as an emotional exorcism. Conceived, constructed, and unleashed by one man in a basement studio. Now, even as the band has grown to become a headlining festival act; cracked Billboard’s Top 25; lit up SiriusXM radio; and were crowned Breakthrough Band at both the Metal Hammer Golden Gods Awards and Loudwire Music Awards, Beartooth’s music and message remain intensely personal. The fierce dedication to honesty, authenticity, and raw fury demonstrated by Caleb Shomo is at the center of everything Beartooth represents. The music he’s crafted in his darkest hours transcends, connecting with the broken hearted and isolated around the globe. Songs like “In Between,” “Hated,” “The Lines,” and “Sick of Me” have been streamed hundreds of millions of times. These are anthems for the downtrodden and disconnected, celebrated with sing-alongs on international tours; supporting Slipknot, Bring Me The Horizon, or Pierce The Veil; on the Kerrang! Tour with Don Broco in the UK; at major festivals like Download and Rock on the Range. What began as artistic self-medication for a single multi-instrumentalist and producer, with no career aspirations or grand plans, quickly caught fire. The Sick EP (2013), Disgusting (2014), and the sophomore-slump shattering Aggressive (2016) comprise a blunt audio journal, chronicling Shomo’s battles with his own demons. As Beartooth became a fully functioning band, bringing these intimate musings to the masses, that purity remained, via a consistently isolated creative methodology. The stark look inward further intensified with September 28, 2018’s Disease. The third full-length album from Beartooth is a painstaking, riff-driven examination of the unshakeable throes of depression. While there are moments of positivity, this isn’t the sound of triumph. This is music about survival. “The album is a whirlwind of emotion,” Shomo explains. “Crazy highs, crazy lows, and lots of intensity. This record isn’t about winning anything. It’s about trying to even begin to learn how to deal with things. It’s hard to process just how dark you can get, what you can really put yourself through with expectations. It’s like starting from the beginning all over again. At the end of the day, it is a very dark album.” Even as Shomo and his bandmates played to sold-out crowds across Europe, the battle against mental illness and childhood issues returned, and the seed for Disease was planted. The title track was the first song written for it, setting the overall tone. As always, Shomo recorded vocals, guitars, bass, and drums, and mixed the album himself with assistance from an engineer, now with executive producer (and Grammy winner) Nick Raskulinecz, who has worked with Foo Fighters and Rush. To further enhance the emotional realism Beartooth champions, the third full-length album was tracked in a brand new environment, with an old-school urgency. After crafting the songs in his usual basement domain, Shomo made the trip from the familiar comfort of his equipment and isolation in Ohio to Blackbird in Nashville. “When I make a record at home, I feel really safe there,” Shomo confesses. “Going into Blackbird, there was a lot of fear. Thankfully, going into that environment just brought out the best. It made the songs feel even more real. It was all worth it.” The famous recording studio was the birthplace of pivotal work from a massive list of legends, tastemakers, and up-and-comers; like Alice In Chains, Taylor Swift, and Greta Van Fleet. Determined to challenge himself in new ways, Shomo kicked aside his drum samples and digital guitar tones in favor of rich analog vibes, banging out take after take, to capture the feel of classic favorites like AC/DC and Motörhead. Ten to twelve hour days, six days per week, sweating and screaming through performances, resulted in gargantuan surefire Beartooth bangers like “Used and Abused,” “Manipulation,” and “Enemy,” easily among the strongest songs in the catalog. “You Never Know” was written in collaboration with producer and songwriter Drew Fulk (Fit For A King, As I Lay Dying), after several hours of conversation in a coffee shop. The album closer, “Clever,” was written in an afternoon at the studio, a fittingly sorrowful bookend to Beartooth’s darkest album. “Depression is something that’s just ‘in your head,’ there’s no reason for it, so it ‘should’ be easy enough to just get over, but I can never do it. It’s something unshakeable. I can’t make it work,” Shomo says. “I wanted to write an album about that. Disease really encompasses everything emotionally that I wanted to convey.” Shomo’s commitment to raw and personal truth will always define Beartooth. “It’s very important that I stay honest with every song that I write. I didn’t even mean to start this band. I wrote a couple songs and I felt way better afterward. Especially with this record, there are no compromises. It is exactly what I wanted to make.” With Beartooth, what begins each time as the personal expression of one man is shared with his bandmates, then through the power of musical inspiration and connection, is given to the world then returns to its creator, to begin the cycle anew