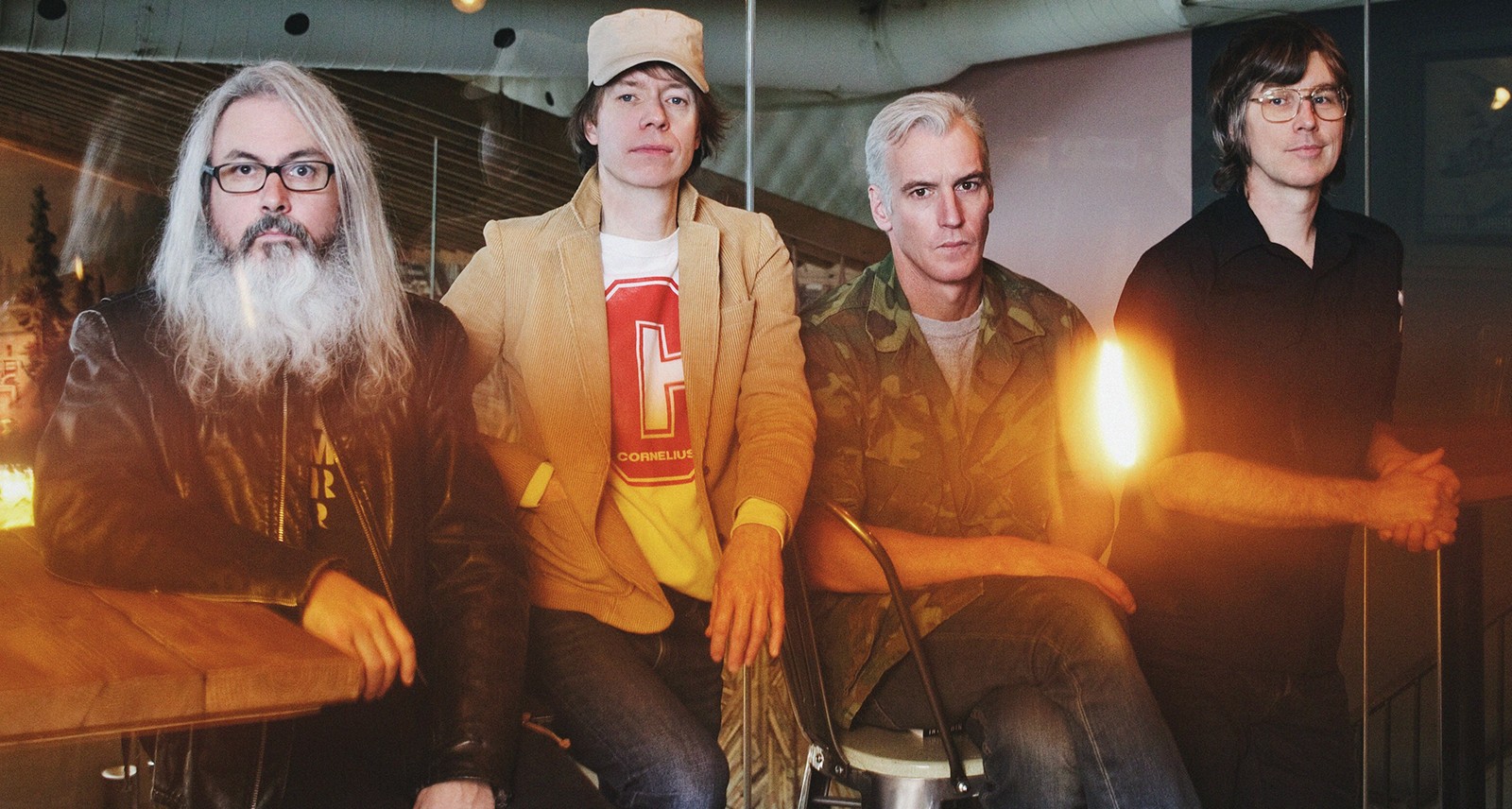 Actually that’s not entirely true. “When we were making the record, I kept Tweeting about it and hashtagging the posts #Sloan12,” Pentland “So I was like, let’s just call it Sloan12. Naming records is always the worst and we can never agree on a title!”

It’s pretty together. On their previous release, 2016’s Commonwealth, each member of Sloan was granted their own side to use as a blank canvas, resulting in a collection of de facto solo EPs packaged as a double album. This time, the band were eager to initiate more creative cross-pollination—well, at least to start. “We’d hoped that this LP would be more of a reaction to Commonwealth,” Ferguson says. “Whereas that album was more of everyone retreating to corners to produce and sequence a side of their own material, this one would potentially have more collaboration than usual.” Alas, as Murphy notes, with three parents in the band, “It’s hard to get everyone in the room with kids, and people getting sick from their kids, and hockey practice with their kids.” Still, that collaborative spirit shines through on Murphy’s “Wish Upon a Satellite,” a glorious union of AC/DC chords and Big Star choruses that features a second-verse lead vocal from Pentland, while the normally self-sufficient Scott invited Murphy and keyboarist Gregory Macdonald to (in Murphy’s words) “come barf harmonies and melodies all over” the Pink Floydian reverie “44 Teenagers.” And while the 12 songs on 12 greatly emphasize each member’s distinct personality, they’re all ultimately united by their lean economy and punchy precision. “I really wanted to make a concise record after the sprawl of Commonwealth,” says Murphy, noting this is the first Sloan record to feature equal song contributions from all four members since 1999’s Between the Bridges. “I think this record will be that much easier to digest. It’s certainly easier to learn!”

It’s smeared in Smeared. Sloan’s 1992 debut is something of an outlier in the band’s discography, foregrounding a formative love of shoegazey guitar effects that the band hasn’t indulged since. “Some Sloan fans don’t even count Smeared,” Murphy “They start at [the 1994 follow-up] Twice Removed, because that’s when we really started to become the band we are now.” But Sloan12 is rife with Flanger-induced flashbacks: the introductory surge of Murphy’s “Spin Our Wheels” conjures the gliding momentum of the band’s Converse-clad classic “500 Up,” while Pentland’s “All Of the Voices” comes slathered in the signature harmonies that powered their breakthrough single “Underwhelmed.” Another of Pentland’s compositions, “The Day Will Be Mine,” is even less subtle in announcing its inspiration. “It’s basically ‘Marcus Said,’” Pentland laughs, referring to the droning Smeared highlight. “I realized that a part of the sound of our first record was me making noise, and that’s really my strength: guitar noise that envelops pop songs. I would say there’s definitely an element of early Sloan to this record that we haven’t looked at it in a while.” Adds Murphy: “I think Smeared was actually the last time we were all equally excited by the same movement: all that grunge and shoegaze stuff. And since then, we’ve all split off to explore our own musical interests in our songs.”

Some of these tracks won’t just remind you of older Sloan songs, they are older Sloan songs. As Pentland notes, when you have four songwriters playing together for the better part of three decades, “there’s a lot of riffs ” By his estimation, the music for “The Day Will Be Mine” has been kicking around for 20 years in search of the right lyrics; “All of The Voices” dates back to the sessions for 2003’s Action Pact, but, he says, “nobody cared about it when I wrote it and we demoed it. Then, when we got together for this record, I gave everybody else the demo for that song, and they were like, ‘Where did that come from?’ And I’m like, ‘I wrote that 15 years ago—you all played on it!’”

Yes, Patrick is fully aware “All of the Voices” sounds a bit like Oh well, whatever, nevermind. DGC represent!

But this is no nostalgia “Because it’s 2018 and we’re still making records, the ’90s mean very little to me,” Pentland says. “I don’t look back at that era with any real fondness, whereas the 2000s have been more interesting to me—maybe because we’re more relaxed now.”

You will learn fascinating facts about arcane British property With its vivid images of chalets, mountains, and ancient Welsh castles, Ferguson’s “Right to Roam” lets you vicariously travel through the UK countryside on the back of a sprightly, locomotive, acoustic pop tune. “‘Right to roam’ was a term I’d only first heard of when at a wedding in England,” he says. “A relative of the groom was telling me about his hiking adventures in Scotland where they have a freedom-to-roam act giving people access to private land for wandering, walking, and hiking to prevent creating a country of overwhelming private property. I used the phrase as the basis for an England/Wales travelogue, and also a contemplation on pluses and minuses of personal freedom.”

Yes, there’s another Sloan song called “If It Feels Good Do ” Murphy’s boogie-woogied jam “Don’t Stop (If It Feels Good Do It)”—another older song salvaged for the new record—may share its parenthetical name with Sloan’s Pentland-penned 2001 hit single, but as he claims, “I had my ‘If It Feels Good Do It’ song before Patrick had his, and we just decided at the time that his was better!” (NOTE: Pentland disputes this account of events.)

This time, it’s personal. In recent years, Pentland has become more open about the anxiety and panic attacks that have plagued him as a performer. On Sloan12, he channels those experiences into two of the album’s most rousing songs, “The Day Will Be Mine” and “Have Faith,” both of which use amped-up riffs and huge hooks to burrow a path from darkness to light. “Depression and anxiety were definitely on my mind when I was writing those songs,” he “Both are basically about desperation— something has to change or this is not going to have a happy ending.” And while Scott is known for trading in surrealist imagery and cryptic wordplay, the psych-folk sway of “Gone for Good” chronicles the breakdown of a friend’s marriage in the wake of an illicit affair. “It’s written in the spirit of [Twice Removed’s] ‘People of the Sky,’” he says. “As in: non-fiction.”

Now, about that Gord Downie line. As 12 eases you into its comedown closer, Scott’s “44 Teenagers,” the song’s cosmic-rock spell is momentarily broken by one particularly eye-opening lyric about a certain late Canadian rock icon. “Just the other day I was reminded of the many ways Gord Downie died/ I see a kid in my head who will be seeing red, until his anger yields to pride,” Scott sings with laissez-faire élan. “That song was deliberately written as an ode to the teenager,” Scott explains. And part of that, he adds, involves examining how teenagers process trauma. “The line isn’t so much about Gord passing, but about feeling sad for his teenage son who just lost his dad. And not suddenly— but in a terrible, protracted kind of When I was 14—the same age my son is now—my dad dropped dead in front of me from a massive heart attack. He was just 48 so you can perhaps imagine what the years leading up to that number have been like for myself.” For Scott, this wasn’t purely an exercise in speculative songwriting from an emotional distance—not only did he and Downie know one another, Scott’s teenage daughter and Downie’s son are actually schoolmates. “There are many layers to the lyrics that hit home for me in a very real way,” Scott says. And besides, knowing Downie’s healthy appreciation of subversive humour and absurdity, “I think he would’ve loved the tribute.”

Sloan are still here to serve you. On the surface, Ferguson’s centerpiece track “Essential Services” seems like another joyous display of the band’s consummate craftsmanship, using a bouncy “Mr. Blue Sky” piano line as a trampoline for some sky-bound CSNY-worthy harmonies. But couched within its ecstatic sound is a poignant statement of purpose. Says Ferguson, “Chris thought the song was a fun way of referring to our band, being an essential service—we can’t go away! The song touches on that aspect of our The chorus—‘essential services are counting on you’—refers to ourselves, but also the ‘you,’ meaning our audience and how we count on them to support and continue with us. They’re part of the equation as well. Does that sound too corny to say?” Hey, if it feels good, do it.